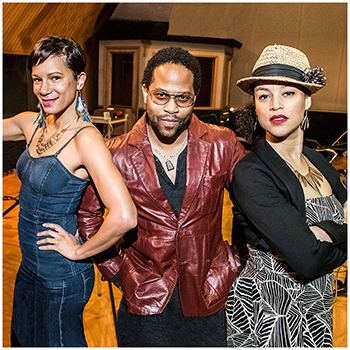 Dub Nation was formed in 1994 with musicians from all over the San Francisco Bay Area. Founder and bassist Frank “Fantom” Caruso crafted a fresh Reggae sound with their 1996 debut release, “One Great World.” Tour dates immediately ensued and in 1998 the follow up ”Let the Truth be Known” established them as a premiere American Reggae act.

From 1996-2000 the band played all the major festivals like Reggae on the River, The Sierra Nevada World Music Festival, Reggae in the Park San Francisco, The Oregon Country Fair, Bob Marley Days, and The Vermont Reggae Festival. They also began performing as a backing band for some of Jamaica’s top roots artists: Judy Mowatt, The Congos, Yami Bolo, JC Lodge, Justin Hinds, Sister Carol, and their fellow American group Big Mountain. Caruso began managing several Motown groups in 2000, most notably The Temptations, where he met lead vocalist GC Cameron who was also one of the original Spinners.

A big part of the Dub Nation sound is their horn section.  John Caredio on   Trumpet, Kenny Schick on Saxophone, and Trombonist Balboa Becker make up  the trio. Along with the guitar textures of Leland Smith and David Rampley, drummers John Flaherty and Chris Cortez hold down the foundation, and the sizzling keyboards of father and son team Peter and Cameron Nuessmann complete the line up

Dub Nation has been selective in their live performances over the last 10 years. Exclusively for The Sierra Nevada World Music Festival, where the band has performed 5 times since it began in 1993, and Caruso has helped produce the event for over a decade.  Their mission in 2019 is return to stages and bring their brand   of solid Reggae Music to fans everywhere.